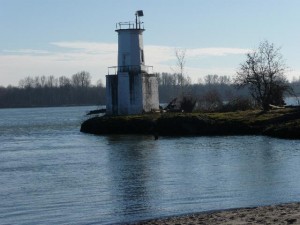 Warrior Rock lighthouse helps guide river traffic on the Columbia River. It once contained the Pacific Northwest’s oldest fog bell. It is Oregon’s smallest lighthouse, and one of only two Oregon lighthouses still operating which are not on the Pacific Ocean.