History of the Island

Sauvie Island was formed beginning more than a million years ago in the Pleistocene era, from mountain sediments washing downriver, stopped by a ledge of large rocks. Over eons the soil accumulated and the ledge became the island’s northern end, today known as Warrior Rock. Annual freshets layered mud and sand to a depth of 30 to 50 feet, shaped eventually into soft, rolling contours, speckled with dozens of lakes and ponds. The result became an island landscape unique in the West. 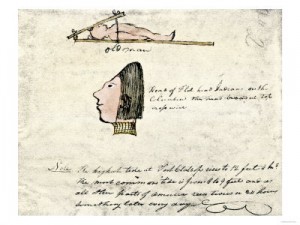 The original inhabitants of the island were the Multnomah tribe of the Chinook Indians. There were 15 Multnomah villages on the island, and the 2,000 islanders lived in cedar log houses 30 yards long and a dozen yards wide. Each family would have its own entrance and fire pit within. They hunted, fished and gathered plants year-round. The Multnomahs were flathead Indians. Babies were tied to a flat board, with another piece of wood fixed across the baby’s brow, pressuring the skull to flatten in a continuous line from crown to nose, resulting in a look respected for distinction and superiority.

Women wore a mantle of animal skins and a fringed skirt of cedar bark, anointed their hair with fish oil and wore ornaments of white shells called hiaqua. Wapato, the arrowhead-leafed wild potato, was a major food source. The women would go out in a lake or pond with a canoe, and harvest the bulbs by digging into the mud with their feet. Wapato was roasted and eaten, dried, stored and traded to other tribes.

White exploration of the Columbia River began in May, 1792, when Captain Robert Gray traveled 36 miles upriver, still 50-odd miles north of the island. Six months later during a naval expedition led by Captain George Vancouver, Lieutenant William Broughton was sent to survey the Columbia for the British Admiralty, and he reached the island. About 150 warriors arrived in 23 canoes when he landed on the rocks at the island’s northern end. Indians from another river tribe who accompanied Broughton explained his mission, and the islanders welcomed the men and stayed to trade. That night, the British explorers slept on the island. Broughton named the location Point Warrior and today’s name of Warrior Rock still bears the remembrance of the occasion.

Lewis and Clark literally put the island on the map during their explorations of 1805 and 1806, when they named it Wappatoe Island. On November 4, 1805, they camped across the Columbia from the island near the confluence of the Lake and Salmon Creek rivers. On the return trip, they camped March 29, 1806 just east of Bachelor Island.

“I [s]lept but verry little last night for the noise Kept [up] dureing the whole of the night by the Swans, Geese, white and & Grey Brant Ducks &c. on a Small Sand Island … they were emensely noumerous, and their noise horid.” — William Clark

The next islanders and Laurent Sauvé

During the next decades the Native Americans weathered outbreaks of smallpox, syphilis, measles and tuberculosis. Then in 1829 a horrifying epidemic of a fever known as the ague swept across the land. Within two years, the natives were nearly extinct. Less than a decade later the Hudson Bay Company, with its Fort Vancouver just across the Columbia, sent a French dairyman, Laurent Sauvé, to establish a dairy. Around 400 cattle were swum across the river from the fort. Sauvé was to produce butter for the Russian settlements in Alaska with whom Hudson Bay had a contract. The island came to take his name.

Not long after Sauvé began the dairy, in 1845, a party from the Savannah Oregon Immigration Society set out from Missouri across the Oregon Trail. Four of the 64 wagons carried Robert E. Miller, his wife Sara Fergueson, eight of their 11 children, and their families. They arrived on Sauvé’s island and settled near each other. The land where Howell Territorial park sits today was claimed by the Miller’s daughter Julia Ann and her husband, James Francis Bybee. Bybee later headed, as did many pioneers, to the great California gold rush. He found gold, and returned with enough money to build the nine-room classical Greek Revival house that stands restored on the property today.

Farming, the dikes and the bridge

In 1850 the U.S. Congress passed the Donation Land Act to reward pioneers for their hardships in settling the West. A married couple could claim 640 acres, half for the husband, half for the wife. By 1856, most of Sauvie Island was staked out by settlers who farmed the island’s exceptionally fertile soil. Beginning in the 1920s, dikes were built to protect houses and farms from the freshets that flooded the island every year in early summer, and sometimes again later. In 1950 a small bridge was built to connect the island to the mainland. Before that, people traveled by boat or ferry to cross the Multnomah Channel.

The island is approximately 24,000 acres—about 15 miles long and about four miles wide, almost the same size and shape as Manhattan. The northern 12,000 acres are owned by the Oregon Department of Fish and Wildlife and managed as the Sauvie Island Wildlife Area. The lakes and natural areas are a major stop on the Pacific Flyway and a bird-watching mecca. The southern half of the island is graced by farmland, including Century Farms (some that still bear the names of the early pioneers), farmers’ markets, an organic CSA (community-supported agriculture) and many U-picks. In 2008, a new bridge was dedicated by Multnomah County, its main span floated downriver in a memorable spectacle. With flat roadways, the island is popular with bicyclists and joggers. Sandy beaches on the Columbia draw warm-weather crowds, and the island is also renowned for hiking, hunting, fishing, and boating. There are not many places on earth where at sunrise you can go on a bald eagle watch and count a dozen bald eagles, paddle midday on a lake whose shores brim with wapato steeped in history, and at sunset travel a half hour into town to an elegant theater and watch Baryshnikov dance. The island’s population: about 445 households and 312 species of wildlife. Sauvie Island is a unique place, indeed.

Spencer, Omar C. The Story of Sauvies Island, Binford and Mort, Portland, OR,